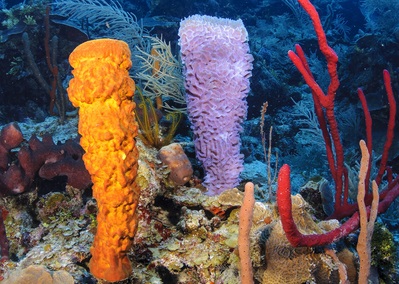 Home to eight percent of the world's biodiversity, Central America's mild temperatures, humid climate and over 400 protected areas make it one of the best places in the world to discover thousands of endemic species, luscious rainforests and stunning coastlines.

Located on the east coast of the isthmus, Belize is one of the most exciting places in the world for water lovers. Thousands flock to Belize to admire the second biggest coral reef in the world: the Mesoamerican. A treat for diving enthusiasts who can come to  admire the coast as well as the thousands of exotic underwater species that live on the coral, such as manatees, sea turtles, barracudas and sharks.

Travellers interested in diving or snorkelling on the reef can stay in any of the villages or resorts along the coastline or on the islands that give access to an array of diving and snorkelling sites. Some of the best places to stay within easy access to the coral reef include Ambergris Caye (an island off the northeast coast) just a ten minute boat ride away; Caye Caulker Island, close to the famous Blue Hole and Half Moon Caye Natural monument; the towns of Dangriga and Hopkins located on Belize's central coast with a number of diving sites and only a 30 minute boat ride from the South Water Caye Marine Reserve; and the town of Placencia on the southern coast, 40 km from the reef but can be accessed in 45 minuteS, and offering many options for diving and snorkelling.

Costa Rica's geographic position, coasts and mountain ranges have made it one of the richest places in the world in terms of endemic species. The best place for monkey spotting and trekking in Central America is in Costa Rica's Manuel Antonio National Park. Located 120 miles from Costa Rica's capital San Jose, the park is home to most of the country's native species such as howler monkeys, iguanas and sloths to name a few.

The park is open Tuesday through to Sunday from 7:30am to 4pm. The best time to visit the park is from May to November. Peak months are from December to April and can get quite busy.  The entrance fee is $6 (£3.80) and free for children 12 and under.

Nicaragua is home to the largest expanse of rainforest in the whole of Central America, the Bosawas Biosphere Reserve, which spreads over almost 15% of Nicaragua's national territory in the north of the country.

The 1.8 million acre reserve offers fantastic hiking challenges for travellers in need of some adventure, since much of the Bosawas Biosphere is uncharted territory. It hides some 150,000 insect species and over 600 types of birds including the Harpy Eagle, not to mention the hundreds of endangered mammals that roam the reserve such as jaguars, pumas and tapirs.

The best way to visit the reserve is on a Nicaragua trekking adventure, as entrance is not permitted without a guide. Entrance to the reserve is accessed from the town of Siuna. Most visitors fly from the Aeropuerto Internacional Augusto C Sandino in Managua to the Aeródromo de Siuna with La Costeña airlines. Return flights are priced from £77.

Bird watchers cannot miss a stop off in El Salvador. Located on Central America's Pacific coast, it has a rich range of birds and butterflies that can be admired in one of the country's four national parks. The most famous is El Imposible National Park, located in the southwest of El Salvador and 120 km west of San Salvador and is considered to be the most important natural area in the country. Over 500 species of birds live in the national park including the turquoise browed motmot which was declared El Salvador's national bird in 1999.

The main entrance is San Benito on the southeast side of the park beyond the hamlet of San Benito. Visitors have to visit the San Salvador office to pay an entrance fee of $8 (£5) and book a guide in order to enter the park. The best time to visit is from October to February outside of the rainy season. Visitors can access the park by flying into San Salvador International Airport and then take a taxi or a bus (116km) northwest to the park.

Getting there:
From May 4th 2016 British Airways will fly directly from London Gatwick to San Jose Santamaria International Airport in Costa Rica. Return fares start from £687 including all taxes and charges. www.ba.com

From San Jose Santamaria International Airport, Avianca Airlines, Copa Airlines and TACA Airlines all fly to a variety of destinations across Central America.