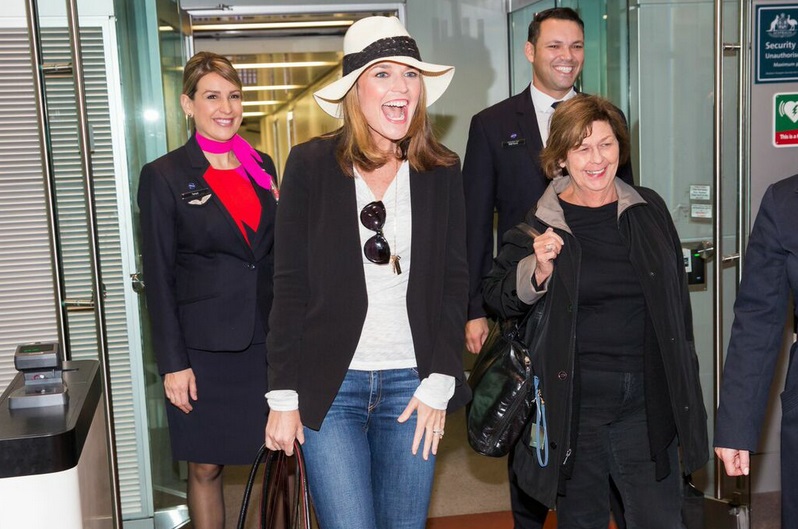 The Sydney Harbour Bridge, Bondi Beach, Sydney Harbour and historical inner-city neighborhoods of Paddington and Surry Hills is also on the agenda for Australian-born TODAY co-anchor Savannah Guthrie and the TODAY crew.

Destination NSW Chief Executive Officer Sandra Chipchase said Sydney has warmly welcomed Savannah as she arrived on Sunday 3 May 2015. “Savannah is going to experience some of the very best our city has to offer. Some of the activities Savannah and the TODAY crew will be featuring include sailing on Sydney Harbour, BridgeClimb, visiting the iconic Sydney Opera House, witnessing our lifesavers & nippers in action on the sands of Bondi Beach and shopping along the style-miles of Paddington and Surry Hills,” Ms Chipchase said.

“We’re also planning a special preview of Vivid Sydney, our festival of music, light and ideas which warms up the city with a celebration of light music and ideas from 22 May to 8 June; plus a meet-and-greet with furry friends from Featherdale Wildlife Park. There will also be a fireworks display to give Savannah an insight into Sydney’s world-famous New Year’s Eve celebrations,” she said.

The opportunity, which was secured by the NSW Government’s major events and tourism agency Destination NSW in partnership with Qantas Airways, will showcase NSW to the lucrative US market and promote the state as a must-see tourism destination.

Images of Sydney will also appear in the feeds of more than 4 million TODAY Facebook fans, tagged with #savannahinsydney. NBC’s TODAY Show will broadcast live outdoor at East Circular Quay and the Sydney Opera House at 9pm on Monday 4 May 2015. Sydneysiders can join the crowd to watch the broadcast and welcome Savannah to the city.

Savannah is travelling to Sydney with her mother Nancy for the first time since they departed Australia for the US in the 70’s. The pair plan to celebrate an early Mother’s Day together while they are here.

Destination NSW has compiled a list of suggested activities for Savannah while she is in Sydney which includes:

The US is the third largest source market of visitors to NSW with more than 323,000 visitors travelling to NSW from North America in the year ending September 2014. These visitors stayed 4.3 million nights providing a $535 million boost to the local economy. (Source: International Visitor Survey, YE Sep 14, Tourism Research Australia (TRA))

For more information on Sydney go to www.sydney.com.