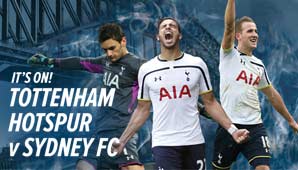 29 May 2015. Sydney lit up when legendary English football club Tottenham Hotspur FC took a climb up the Sydney Harbour Bridge, which was specially illuminated in blue and white lights and with projections of Spurs players on the iconic structure’s sandstone pylons, to celebrate the team’s arrival into the Harbour City Thursday morning.

The full squad took time out to see the harbour bathed in colour and light for Vivid Sydney, the world’s largest festival of light, music and ideas. As they enjoyed a special BridgeClimb, the players could be seen from below making their way across what is affectionately known as “the coathanger” thanks to their special illuminated vests.

To welcome the legendary football club to Sydney, the western side of the Sydney Harbour Bridge was also lit up in shades of blue and white and with images of Spurs’ Captain and goalkeeper, Hugo Lloris; Spurs’ striker, Harry Kane; and Spurs’ midfielder Christian Eriksen projected onto the pylons.

On making their way down from the Bridge, Harry Kane took the opportunity to grab a ‘selfie’ with their projections behind them on the Bridge pylons.

Tottenham Hotspur striker Harry Kane said “Sydney is a great city and it’s been amazing so far since we got here this morning. I’ve managed to see the Sydney Harbour Bridge and the Sydney Opera House. It looks like a great city and I’m really enjoying my time here. I’ll definitely be coming back on a holiday one day and telling all my mates to come along as well.”

Goalkeeper Hugo Lloris said “It’s my first time in Sydney and I’m really enjoying my time. We are all really excited to discover this nice city.”

NSW Minister for Trade, Tourism and Major Events and Minister for Sport, Stuart Ayres said “Tottenham Hotspur has been a football institution for over 130 years, and we are delighted to have secured their only Australian game for Sydney through our tourism and major events agency, Destination NSW.  This visit will showcase Sydney to a global audience and attract visitors from all around Australia and the world.

“While in Sydney, Tottenham will also have the chance to check out more of Sydney’s attractions including visiting Vivid Sydney, and a day sailing on our spectacular Sydney Harbour. We look forward to showing them why our beautiful city is the number one Australian destination for international visitors,” Mr Ayres said.

Tottenham Hotspur FC is in Sydney ahead of its friendly match against Sydney FC at ANZ Stadium on Saturday 30 May, 2015.

Tickets are still available to this hotly-anticipated match with the renowned Brits and is set to be a once in a life-time game to see.

For more information on Sydney go to www.sydney.com. The full Vivid Sydney program and ticketing information is available at www.vividsydney.com

Tickets to the Tottenham Hotspur vs Sydney FC game can purchased through Ticketek, at www.ticketek.com.au