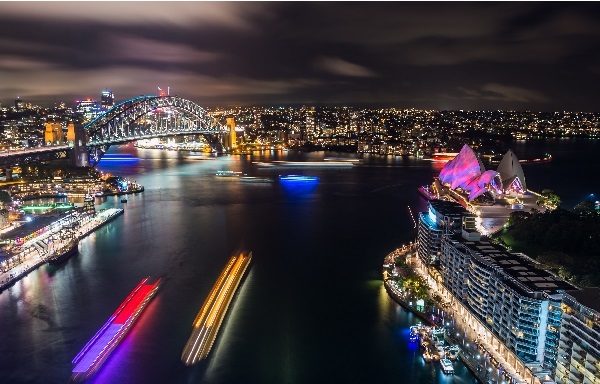 Accor's Sydney CBD hotels saw an occupancy increase of 2.2% across Vivid opening weekend (22-24 May), as its Sydney hotels were 87.9% full.

Harbour Rocks Hotel was at 100% capacity on opening night, and sat at 98% occupancy for the remainder of the weekend. Food and drink specials celebrating the creativity of Vivid were put on for visitors to enjoy at Eric's Bar and Scarlett Restaurant and the hotel reported lines snaking around the hotel with people wanting to be part of the action.

General Manager for Harbour Rocks Hotel, Dylan Cole, said, “We saw a 14% increase in revenue across F&B compared to last year's opening weekend and the volume of people coming through the hotel was phenomenal. We have installed a Creperie Suzette bar which was buzzing Friday through to Sunday and it was fantastic to see both the young and old getting into the spirit of Vivid.”

Pullman Quay Grand Sydney Harbour which sits right atop Circular Quay and directly faces the Harbour Bridge averaged 96% occupancy across Vivid opening weekend and ECQ Bar and Q Dining were popular venues to watch the spectacle throughout the entire weekend.

Accor Vice President Operations NSW & ACT, Scott Boyes, said, “Once again, Vivid Festival is off to a cracking start and it is incredibly pleasing to see our Sydney CBD hotels out-shining the opening weekend results achieved last year. Having a strong events calendar is so important for our hotels and gives a major boost the broader economy, and we would like to congratulate the NSW State Government, Destination NSW and the Sydney Harbour Foreshore Authority for making Vivid Sydney bigger and better than ever.

“Its events such as Vivid which makes Sydney such a great place to visit and live in, and we're looking forward to welcoming more guests into our hotels over the remainder of the Festival”.

For more information and to book Accor hotels, visit www.accorhotels.com.