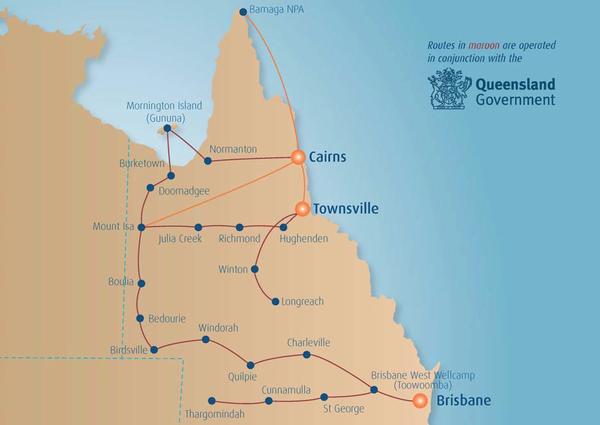 Regional Express (Rex) has announced today the introduction of 3 return flights each week day between Cairns and Townsville from 6 July 2015. Rex commenced weekend services between these cities on 3 January 2015 and from 6 July 2015 will increase the number of services from 2 to 34 flights per week.

Commenting on Rex's decision to expand services between Cairns and Townsville, Rex General Manager Network Strategy and Sales Warrick Lodge said, “Ever since Virgin Australia exited the Cairns to Townsville route in January 2014, Rex has been heavily solicited by businesses and individuals to start a competitive air service so that the prevailing monopolistic pricing may be broken. In response, Rex undertook a market sounding exercise to gauge business community support for Rex and the level of prevailing dissatisfaction with the incumbent monopoly."

“The stars finally aligned when Rex was recently awarded five regulated routes by the Queensland State Government. This unprecedented vote of confidence by the State Government convinced the Rex Board to reciprocate by dedicating significant resources to expanding regional air services in rural and regional Queensland."

"The expansion plans into Northern Queensland are both exciting and ambitious. Today's inauguration of the much needed direct service between Cairns and Mount Isa closely follows our earlier launch of daily services to the Northern Peninsula Area (Bamaga) from 30 March 2015. Next will be the launch of the thrice-daily services between Cairns and Townsville on 6 July 2015 after which Rex intends to provide other communities of far North Queensland and the Torres Straits with an opportunity to work in partnership with us to ensure that their communities may have a sustainable, reliable and safe air service with affordable fares."

"Rex's significant investment in North Queensland will bring jobs and other important socioeconomic benefits to the region and will help in their economic development. Further, our Cairns to Townsville services are estimated to deliver about $4 million in fare savings per year for the two communities in addition to providing better schedules more adapted to the needs of the business traveller."

Mr Lodge continued, “In a short 5 months, Rex has clearly demonstrated its commitment to North Queensland and has brought significant benefits to the communities. I urge everyone to give us a fair go so that the benefits are long lasting and more services can be introduced over time.”

Reservations for Cairns services to Mount Isa and Townsville can be made via www.rex.com.au, 13 17 13 or through your local travel agent.